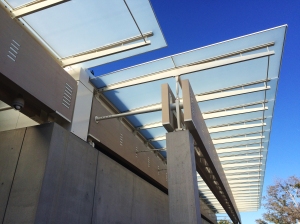 I recently had the opportunity to spend a long weekend in Dallas, a trip that was months overdue to visit my best friend; a fellow designer with whom I graduated from Virginia Tech’s architecture school just a few years ago. It certainly was the type of trip that would have been worth making regardless of what his post-grad landing spot had been, but I must admit the voyage to Dallas was one that had been sitting on my “architectural bucket-list” for some time now. As a graduate of a school founded on the same modernist design principles as the famed former Bauhaus school in Germany, like any diligent architecture student I had intensively studied and come to love the Kimbell Art Museum in Fort Worth by Louis Kahn, one of the greatest architects in history known for his style of the combination of modernist design principles with the weight and monumentality of ancient ruins. Despite my love of Kahn and the influence his work had on my own development as an aspiring architect, I had yet to ever visit any of his work in person. The trip provided precedent to not only share good times with great people, but also an opportunity to make a long-awaited pilgrimage of sorts.
As budding “design-towns”, Dallas and Fort Worth have actually become home to many works of “starchitecture” over the past several years, and our drive to Fort Worth from Dallas included several stops along the way at some spectacularly designed buildings and spaces. After a few hours however, we made our way to the Fort Worth cultural district – for those unaware of the cultural district, within a stone’s throw of each other sit Tadao Ando’s Modern Art Museum, Louis Kahn’s Kimbell Art Museum, and now more recently Renzo Piano’s Kimbell Art Museum addition – three undisputed masters of the architectural craft, and each museum one of the more acclaimed works of their creators respectively. For a total cost of $5, we gained entrance to all three; an architectural bargain without doubt.

For the first time in years since having the opportunity to study in Switzerland during my time in undergrad, had I made a trip with the specific purpose of going to see and study a tauted work of architecture. After starting with Ando’s work for a few hours, we made our way over to see Kahn’s Kimbell. It was physically hair-raising for me as we made our way through the main vestibule, for this was not just a building or for that matter even, a house of art and culture to me. It was a living symbol of work I had aspired to, and a physical construct that I had only ever attempted to experience through plan, section, elevation and photograph – but now I was here. As we started making our way through the space, embarrassingly it was perhaps a good 30 minutes before I realized there was even art in the building. I could not contain myself and stop my quirky habits of touching the walls, the floor, running my finger through the concrete and stone joints, and aimlessly attempting to capture the essence of the subtle wash of light laying on the ceiling with an iPhone… At one point a curator approached me and asked if I was an architect – I told her I had finished my schooling a few years back and now worked at an architecture firm as she suspected and she began to laugh. She told me, “I can always spot the architects when they come here because they forget that we have art here too!”

We eventually made our way however to a little pocket courtyard garden in the southern portion of the building, and went outside to sit down for 10 or 15 minutes as our feet were getting weary from hours of walking. We did not speak while we were out there, but just sat and enjoyed the perfect weather and setting. It was in that moment for the first time in years I am again reminded why I pursued a career in architecture, the power of ‘place’, and the necessity of travel. That building was perfect, and I was completely overcome with its power and grace. You don’t have to be a designer to appreciate space that good – you just have to have eyes and a heart. After a weekend of visiting architecture, watching bull ridin’ and eating BBQ came to a close, I felt happy and at peace on the plane ride home. While Kahn was publicly known for having a strained and perhaps unethical family life, what I always came to admire about him was what drove his absolutely obsessive nature over his work – he absolutely loved people, and he showed his love of people through his work. He wanted to create better places for people to live, work and enjoy life. What more can you ask of for a life-long sustaining reason to continue your pursuit of something? If I design something one day with but a fraction of the meaning and spiritual quality as what Kahn’s Kimball has meant to so many people over the past 40 years ( both architects and non-architects alike ), my career will have been worth it.

Architecture is many things to many people – for some it is art, and for some it keeps the water out. For me it is both of these, but moreover it also must speak to people and touch the soul – great architecture endures because it evokes positive memory and a sense of presence. A daily routine and ritual does not lend itself to such reminders or re-inspiration. Travel provides the opportunity to remove yourself from the normal and use experiences to re-evaluate and re-charge the mind and body. This trip being the first of its kind in my post-grad life reminded me of this, and makes a point to where we can all benefit and grow from removing ourselves from the ordinary and placing ourselves into unfamiliar context.